Is Being INCLUSIVE Possible?

There are a lot of popular “power” words and phrases in pop-culture right now, particularly in the fitness scene. I tend to roll my eyes every time I think about “living my best life” but here is the truth: if it motivates somebody it is meaningful. That said, there has been one word specifically that has stuck with me as something I wanted to practice, preach and embody, personally and professionally. Inclusive.

Those of you that know me, know that I can’t ever just make a point and move on. I need to tell you the whole story. So those of you who don’t know yet…Buckle up and prepare for some over-sharing.

For some reason I kept a journal when I was younger. Going back and reading it 20 years later is pretty painful to see that my penmanship has only marginally improved. Beyond that, it is a bit of a delorean into the past of what was a fairly challenging period of my life; when I was young, overweight and had no friends (or calendar apparently).

I was 15 years old and a sophomore in high-school when I wrote this. Like I wrote back then, I played a lot of video games. A lot is actually an understatement. It was almost all that I did during this time of my life. And before people start blaming my parents for allowing me to be like this…don’t. I did my fair share of blaming them when I was younger and none of it was their fault.

They did everything they could to promote a healthier lifestyle for me – even to the point of them driving me to a football field and trying to convince me I could make the football team as a punter if I just tried out. They promised me I would regret it later in my life if I didn’t just try. What they didn’t know was how bullied I was by my private school “friends” and how much I WANTED to be on the football team. I think that is the dream for almost every kid growing up in Green Bay.

I am not looking for sympathy, pity or anything of the sort. I do however feel like it is important to know where I am coming from when we are on the topic of inclusive. No matter what I may look like (yeah I did eventually hit puberty and spread my fat out a little bit – not exactly a heart-throb yet though), I will always be living my life through the lens of the kid that wrote the journal entries. And yes, this is probably why I am socially awkward as well.

Fast forward to 2015. After getting divorced because my ex-wife was “not attracted” to me, I met Grace in the only place I felt really comfortable: the internet. As we began to get to know each other, I realized how much trouble I was in because this girl was an actual athlete. When we first started talking, she was training for a marathon and she would say things like “I’m going out for an easy five;” which apparently meant running 5-miles. How that could ever be easy does not process in my brain. I’m the kid that dropped out of tennis because I couldn’t complete 4 laps around the courts and this girl (who is showing some interest in me) is talking about an “easy 5 miles.” I remember thinking to myself that this will never work out once she find out how non-athletic I am.

I spectated her first marathon and then she started immediately training for a half-marathon. That is when the moment I had most feared came to life. She invited me to train with her and run with her. “She’s going to find out” was all I could think – as if I had been hiding something.

Then came day one – An “easy” 2-miles along the lake shore of Chicago. I walked a lot of it, faked a phone call 3/4 of the way through it, but I finished. Day one eventually turned into day 2 into 60 and then 90 and before I knew it I was doing “easy fives” (which are still not easy for me). Running never became fun for me but it became possible and it became habitual. We would treat ourselves to mimosas and pedicures after our long runs on Sundays. We ran rain or shine, snow sleet or ice.

The more we did it the more people encouraged me. “I never imagined you a runner” was/is a compliment. Any time I was able to surprise someone it made me want to do it a little bit more. I still very much wanted to fit in, but at the same time the physical benefits were beginning to set in. I was starting to get faster. 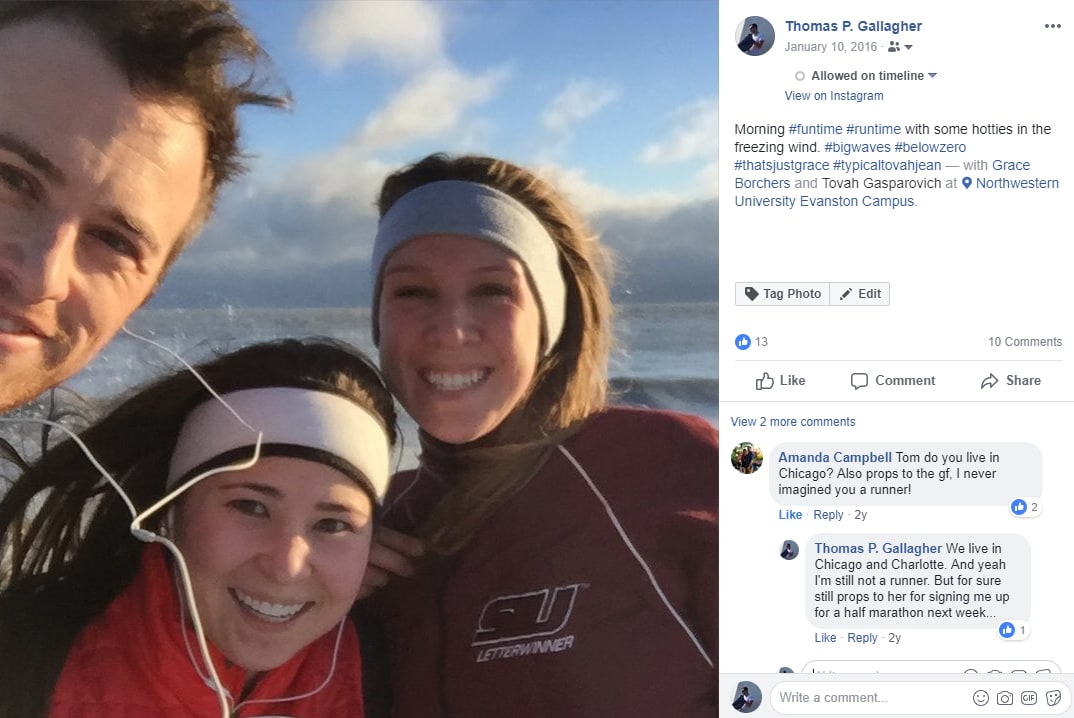 I was never fast, but I was finishing. I ran my first half-marathon in Charleston, SC which may have been one of the biggest physical accomplishments of my life. I finished in 2 hours and 57 minutes. Running alongside, behind and (for some) in-front of thousands of other people was the first time I really felt physically capable. My clock-time didn’t matter.

And then I started talking about it… “2:58 is not even really running…its a brisk walk”.  It was pretty much the only thing people cared about when you talk about running a half marathon – how fast are you / what is your time? That is when the sinking feeling started to set in. Maybe what I just did wasn’t really that big of an accomplishment. I mean, that is at least what most peoples attitudes made me feel.

Except for Grace… She never talked about time except for how much sunscreen I may need to apply on my balding/expanding forehead depending how long I will be outside. It never mattered to her how fast I went. All that mattered was that I was ready to go on the next run. My accomplishments to her were never magnanimous nor were they insignificant. They just were, and they mattered. No matter how out of place, out of my element, or out of time I felt, I was part of something. She never tried to turn me into an athlete, she just tried (and succeeded) to include me.

This is the the girl that co-created SweatNET. This is why.

Now that you know the full picture, and before this turns into a soppy love story, let’s get back to present day.

Grace and Erin, the founders of SweatNET are both really really fit people. But when we started SweatNET together, it was with the intent to be inclusive and break down the barriers to living a healthy lifestyle. The saying was “we’re using Tom as a filter.” Well, here is my filter: Fitness is really scary to us on the other side of those walls of the gym. I don’t have the right clothes. I don’t have the right form, physique, knowledge. I don’t have the right connections, or equipment. I don’t know where to park. I don’t know what to bring or what to say. I don’t know if I can take a break. I don’t know if people will watch me, or judge me, or what if I can’t do it? Seriously…what if I physically can not do it? I can’t do a pull-up. I can barely do 5 push-ups and when I workout I sweat more than any human on this planet. Fitness SCARES me. Fitness feels like high-school all over again for me. Granted, I have overcome the fear of running, but group fitness is an entirely different beast and it is scary as hell.

Check out this commercial from Pure Barre (sorry PB, I love you but we need to talk about this problem with the masquerade of fitness marketing).

How many of those people were overweight? How many of them were not in perfect f*cking sync with each other. If you answered zero and zero, you win!  NEWSFLASH: THIS IS NOT WHAT A PURE BARRE CLASS LOOKS LIKE. This is not inclusive. I’ve been to Pure Barre many times. This is not what it looks like. Show up and you’re welcomed. Show up and it’s not just skinny women in $200 yoga pants. And this is the truth of nearly every single fitness studio of the 150 plus that I have personally been to while photographing. However, it is hard not to feel like a misfit when this is all that we have to look at.

Name the most elite gym in Charlotte in your head right now…Do it… CrossFit ____ ? Madabolic? No matter what your answer was, I promise you there are out-of-shape people there. And they are extremely brave for showing up, often by themselves, especially considering all of the exclusive imagery we in the industry are all guilty of. You don’t need to even be out-of-shape to be intimidated walking into a group fitness class. So I think it is time that we all start showing up for each other. Maybe “living your best life” actually means helping others find comfort in theirs. I’ve been on the other side and it is dark.

SO. Can we as a fitness community actually be inclusive? Can a restaurant be vegan and also serve meat? I honestly do not know but I know we could be doing a much better job at it. Help us be more inclusive here in Charlotte. I don’t have all the answers (or any really) and I would really love to hear your suggestions on how to make this idea of “inclusive” a reality. E-mail me what you think.