How Yoga Improved My Running in 3 Months

Every year I tell myself I’m going to do more yoga and every year I manage to fall short. But with the more miles I run, the more evident it becomes that my old lady body can’t hang anymore. So in an attempt to bring my late twenty’s limbs back to life, this year I made a new year’s resolution to actually get my downward dog on this time around.

But we all know how impossible it is to get to the nearest yoga studio in 5 o’clock traffic. And isn’t a universal truth that new year’s resolutions actually have a expiration date of February 28th? So to put the odds in my favor, I made it as easy as I could: I brought the yoga class to my very own living room! (And no,that doesn’t mean I attempted to create my own flow, because that would pretty much go as follows: downward dog… forward fold… tree… shavansana ). Instead, I discovered Bulldog Yoga, which is a fitness-focused yoga studio that allows you to stream unlimited classes online!

Blown away by this by this discovery, I locked myself into a 3-month membership, rolled my mat out, and went with the flow (pun intended).

Then I made it a point every Monday, Wednesday, and Friday afternoon to log off of work and sign into a brand-new Bulldog class. From high energy cardio classes to more traditional slow-flow ones, there was never a dull moment in my nightly ritual. Plus, since Bulldog prides itself on its upbeat, contemporary music playlists, half the time it just felt like I was Torrence Shipman dancing around in my bedroom to Bruno Mars.

But all the bells and whistles aside, my favorite part about Bulldog is undeniably the ease and convenience of it. By being able to Om at the click of a mouse, I could practice anywhere: in my living room, on my balcony, in a hotel room, in the park, you name it. Then, that flexibility granted me even more freedom: I could flow in my work clothes (aka sweatpants), in my pajamas, and heck, even in my birthday suit (not that I tried or anything… ). I gotta say, this no-chains approach to yoga was so liberating for me!

In all truthfulness, the convenience of being able to practice at the click of mouse is 100% what kept my yoga goals in tact. I made it through those three months and I became a better yogini for it. In comparison, I know for a fact that had I bought a traditional yoga studio membership instead, I would’ve cancelled it a month later. 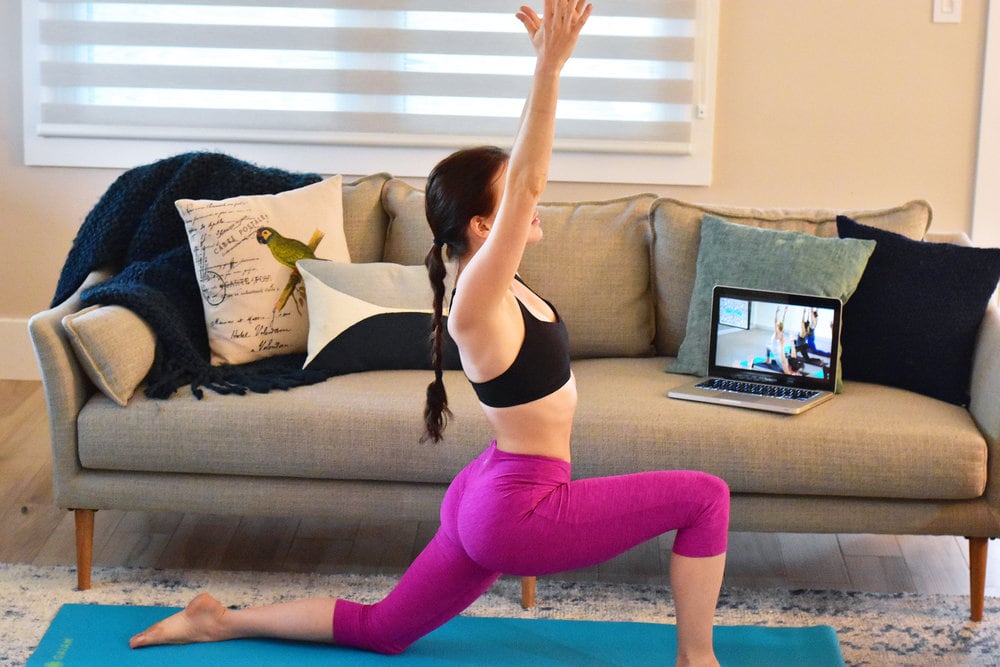 So this is the part where I’m going to stand on my podium and start preaching to all my running buddies to take their zen more seriously too. We all know that yoga and running go hand-in-hand, but I’m going to throw some real-life truths your way, because these are the three miracles I witnessed in my running when I practiced yoga consistently for three months:

It was no easy feat, but forcing my grandma hips into pigeon pose a few hundred times actually turned me into a limber Lucy. (Well, as limber as I’ll ever be.) And all runners know that loose hip flexors are the secret to stride success. So with more open hips, I’ve been able to improve my foot strike and alleviate some running injuries I’ve faced in the past.

My favorite hip opening poses are: pigeon, low lunge, lizard, frog, fire log, thread the needle, and reclining hero pose (for those days when I need an excuse not to walk rest of the day…).

2. My breathing was effortless.

In yoga, there’s this thing called pranayama, which, (contrary to popular belief) is not some asian seafood delicacy. Instead, it’s all the heavy breathing you hear from the overly enthusiastic yogi at the front of the room. Technically, it’s the practice of controlling your breath and if you can get the hang of it, you can actually tap into greater superhuman powers, like increasing your energy, releasing stress, clearing your mind, and even improving your overall health. Plus, as an added bonus: practicing pranayama regularly also helps you take deeper breaths on your runs. And better breathing = faster times.

No, I didn’t lose weight. But instead, by defying gravity in crow pose, I learned how to be lighter on my feet. Mastering tree pose granted me balance and airplane pose taught me what it feels like to fly. So when I took my newfound skills to the streets, I noticed my stride was more efficient and gazelle-like (…or at least that’s what I like to tell myself.  )

So if you’re a gal/guy-on-the-go like me, and you’re on the hunt for a quick and convenient way to namaste, I can’t brag about Bulldog Yoga enough. It’s the Peloton of yoga and it’s redefining what it means to get your zen on. And if you’re ready to take my word for it, I have great news for you: new users get 20% off their first purchase! Can you say, Om my god!? Namaste, y’all!

If you’re interested in adding yoga into your life and are someone who needs an accountability buddy or prefers working out in a studio, become a SweatNET member to receive exclusive rates to yoga studios (and more) around Charlotte!